Since no one remembered exactly what his first word was, Zechariah liked to say that it was “Adonai.” As a priest and leader in the community, his entire life was service to the creator and father of all. Each day he was blessed to rise with the sun, kiss his wife goodbye, and go to temple, where he would stay until the sun was setting. What more could he hope that to be a man seeking after God’s heart? Each day was time searching through scrolls and seeking truth, seeking Adonai. To hope for anything else would be to doubt the life that God in heaven had blessed him with. So Zechariah did not give himself time to hope for something else, to doubt that perhaps something was missing. Each day when he passed men with their sons, going to work in the fields or sitting together or eating a meal or sharing a joyful embrace, he quietly whispered Adonai and gave his life and his hope to God again. 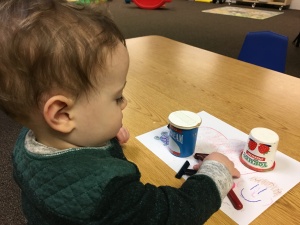 No matter what his first word might have been, and Zechariah still maintained his own theory, there was no doubt that as an elder priest, his daily words were filled with passages from David, Moses, and Abraham. These great leaders and fathers of previous generations guided his work with people in the city. Younger priests would come to him for help in deciphering a passage. Heads of households would visit the temple seeking forgiveness and guidance. As young boys became men, he offered mentorship into the ways of their people. So many words each day were spoken over stretched out scrolls and carved sacrifices. Zechariah sometimes wondered with a smile if there was any many in the city who spoke more than he. Perhaps the fishermen, but they spoke constantly about very little other than the latest storm.

When he arrived home at night, there seemed to be very few words left. Zechariah and Elizabeth had been together for a lifetime and had fallen into a comfortable silent rhythm with one another. She would have dinner ready upon his arrival. They ate side by side at a low table. Then it was soon to bed after a few minutes of prayer together. Once in a while he would share about a new insight from his studies. But usually there was nothing they needed to say. After years of thinking and hoping that change might come to their family, Zechariah had accepted God’s silence and embraced it. He did not ask, but trusted that Elizabeth had done the same.

Zechariah held strong to his faith in God by the light of the sun and even the glow of firelight. In the darkness though, sometimes his faith would crack, just by a fraction. It would occur while he was lying down, waiting for sleep to overcome him. Elizabeth’s breath had slowed and movements calmed. Sounds would drift through the windows from wandering animals or a traveler not quite home. In those brief moments, Zechariah’s faith in God’s perfect and complete plan had one small gap, the one where his hope for a son resided.

Now this hope was never considered in the daytime, or spoke about with anyone anymore. Yes, it had been the topic of many handheld talks with Elizabeth years ago, and even prayed for in the temple over the years. But now he was old, as was his bride, and such hope was foolish. Perhaps even doubtful. Therefore, it was only in the darkness, when such hope belonged more to the dreamer than to the one who is awake. A son to help with a passage of scripture. An heir to mentor in the ways of their ancestors. A man to look after his legacy. Abraham, Moses, and David each brought guidance and life to a new generation. Zechariah had hoped to follow their footsteps. Without a son, he hoped for nothing.

The Art of Blogging
Perfect Chaos