When I signed up for The Great Virtual Race Across Tennessee, there was a very real possibility I would not finish. The event required participants to complete 1000K (approximately 635 miles) within four months. That means an average of 5 miles. Every day. For 120 days.

And because it is 2020, all of that would happen in the midst of a global pandemic.

And because my life is my life, it would also be while I was searching for a job.

As I filled in my information on the registration page, a quote from Martinus Evans (300 Pounds and Running) kept repeating in my head:

Once I entered my first few miles, I proved I would be more than a DNS.

With such a huge challenge looming ahead of me, I needed to start putting in extra miles right away. During the first month there was only day that I did not go for a walk or run. The second month was the same. Each day’s “To Do” list included a section focused on those needed miles. A seven mile run with Kira on Thursday meant that Friday could be less miles…or it could be a chance to get ahead of the required average.

August 31 was the set-in-stone deadline to be done. Anything after that was a “good for you…doesn’t count.”

I joined the event’s Facebook page and watched the messages of runners and walkers around the world. There were some maniacs who managed to finish the distance within the first month. Then they did it again. And again. What do these people do other than put in miles???

Most of the 19,000 registered seemed more like me; trying to keep sane and get done before last call. I had to limit how much time I spent on the page because the words of encouragement and celebration too often felt like competition. And I was losing.

According to the tracker I was estimated to finish in early August. And any attempts I made to move the timeline up seemed to balance back out with busy days that limited me to an evening walk. Working part-time, seeking full-time work, writing, and avoiding Covid seemed to take up most of each day. I just needed to finish before August 31.

Another Martinus quote kept me going through those long summer days:

I completed my final miles for TGVRAT on Saturday, August 8th, exactly 100 days after my first miles on May 1. The ending was part of my weekly run with Beth. 635 miles (plus an extra just in case there was a partial mile requirement). I updated the tracker before I even took my post-run shower. I wanted those miles locked in right away to ensure my final day was my final day.

The race director, Lazarus Lake, sent a group email the following day to all who had finished on August 8th. Apparently it had been quite the tsunami of finishers with someone getting done about every six minutes. The email was congratulatory for all of us who had done the hard work through to the end.

And then it was scary:

If you are in the US,
at most a handful of medals are left.
when we saw the supply was running low,
we suggested people take the buckle instead…

I knew it shouldn’t matter. That the journey was the point and a buckle would be a great way to celebrate.

And I knew that if I got a buckle instead of a medal, the entire thing would irrationally feel like a failure.

I wrote back right away; confirming that I would not be attempting to go back across the state and that I wanted a medal. My email was sent 16 minutes after the original was received. The delay was due to a student appointment. And for eight days I worried if that delay was going to lose me a medal. 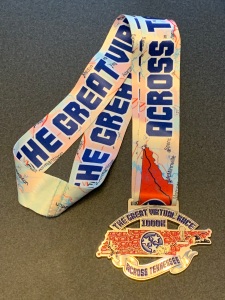 In February my world went sideways with the announcement that my university was closing. Then in March, the whole world started to shut down due to Covid-19. Since then there has been a roller coaster each week amidst so much change and so little change at the exact same time.

I am grateful that in the midst of the chaos was a blessing in my mailbox. A bright and shiny medal celebrating the courage to start, the endurance to finish, and the strength to get up every single day in between.

One thought on “Wanna be a RAT?”

The Art of Blogging
Perfect Chaos