From one, let’s say bleh rather than bad date I learned a very important name: Sara Bareilles.

Within a few years, Sara’s music would be the background sounds of my graduate degree and getting her autograph in a book a highlight of the year. 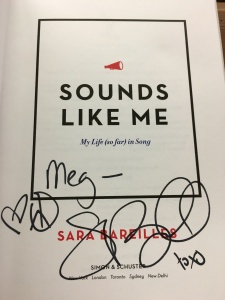 So when I learned in October 2015 that she would be writing the music and lyrics for a musical on Broadway, I was over the moon with joy.  The first released song (She Used to Be Mine) was on repeat several times a day for weeks. Sara was part of the creative team bringing one of my favorite movies, Waitress, to broadway. the tragedy was how long I was going to have to wait to see it.

Waitress hit Broadway in the 2015-2016 season. The same season as another little know show: Hamilton. Yes, my beloved show was going up against the juggernaut that had basically debuted in the White House for President Obama. I wondered if everyone could just sprain an ankle and stall for another year.

But the show went on and was a hit. In fact it was the second show of that season to recoup their costs, after Hamilton, and in less than 10 months. They were nominated for multiple Tony awards and received glowing reviews throughout the press.

I finally understood how football fans felt about their team going to the Super Bowl. I was so proud of my peoples…even though I had absolutely nothing to do with it.

The show deserved to be noticed for so many reasons.  First off it was based on 2007 movie by Adrienne Shelly, which stared Keri Russell and Nathan Fillion. Its a dark comedy that you have to be in the right mood to appreciate, but once you do you will be connected for good to these characters.  A second reason for this show to get attention was that it was the first Broadway show with women in the top four creative spots: director Diane Paulus, choreographer Lorin Latarro, book by Jessie Nelson, and music and lyrics by Sara Bareilles. It took all the way until 2015/16 for a Broadway show to be led by a female creative team. Just let that fact settle on you for a bit before reading on. Oh, and in case you’re curious, “Broadway” started in the early 1900s, so over 100 years for this part of the revolution.

I bought my tickets to see Waitress six months ago, in preparation for its arrival in Portland; though I had a Google Alert set long before that to keep an eye out for it. Almost three years passed between the YouTube clip on repeat to holding the program between my fingers.

The show stars three female leads, with no love triangles among them. They are complicated, imperfect, and leave you wondering if you would want to be their friends. The men in the show have stories beyond the encounters you witness on stage. One of them is emotionally and physically abusive to a main female lead, and the crowd in the theater cheered as she stood up to him and warned if he ever came within six feet of her that she would flatten him. The playwright had added to the original movie by including backstory regarding this woman’s father as an alcoholic and abuser, so this victory was for her mother, for her daughter, and for herself.

There is a lot more to the show, including sweet songs, quick set changes, and lessons to take from an old man. But it was the power of that moment where the woman declared the end to the suffering that echoed through the auditorium. With national politics and media entangled with stories of women not being believed for decades about abuse, to see a woman escape, even in a fictional setting, was a victory. This broken woman deserved and escaped to something better.

She’s imperfect, but she tries
She is good, but she lies
She is hard on herself
She is broken and won’t ask for help
She is messy, but she’s kind
She is lonely most of the time
She is all of this mixed up and baked in a beautiful pie
She is gone, but she used to be mine

The show ends with a brief glimpse into the future of the main three women, with some things that have changed and some that remain constant, like their loyalty to one another. Their lives will not be perfect, and they do not expect them to be, but they are dedicated to be happy, and not just “happy enough.” With sugar, butter, flour, and love. 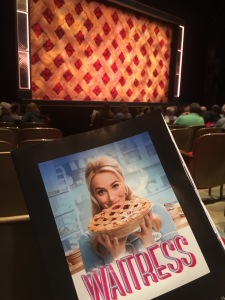 If you feeling trapped by a job, a relationship, or a situation of any type, maybe this movie can be a source of comfort for you as it has been for me. It helps me recognize the beautiful around me within the brokenness, and the friends who will be there no matter my flaws or failures. And that I, like EVERY SINGLE ONE OF US, is worthy to be loved.