The alarm went off at 4:30am on Sunday morning.  A horrible sound ringing through my bedroom that can only mean one thing: I have a race.  And this time it was not just any race: it was the Portland Marathon and my 11th marathon.  After hitting snooze a few times I had to get up to ensure time for breakfast before the 5:59am Trimet bus arrived (if I missed that bus, well Plan B involved crying and then ordering my very first Uber).

What felt like moments later, I was standing among thousands of runners in the cold downtown Portland morning, with just the first flickers of sunlight coming down.  I reflected on all of the drama that surrounded this event:

But none of that mattered on Sunday morning.  I didn’t know who they were, but I was standing among 2,912 marathon runners and 1,495 half marathon runners who had worked hard for months or years to reach this point.  No one could ruin this day for them.  Or for me. 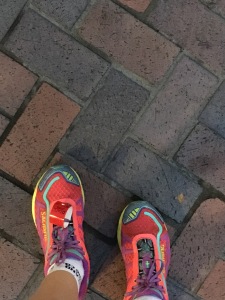 Part of me was super confident on Sunday morning.  I was the healthiest and thinnest I had been since middle school.  I had put in hundreds of training miles between the gym, Saturday mornings with Beth, Wednesday mornings with Kyra and Taiya, long solo runs, and many many walks through my neighborhood.  I had set a good goal for the morning: complete the race in 5:00.  It was a stretch from my 5:19 finish in May 2017, but felt achievable so a worthy moonshot.

Another part of me was a knot twisted into five different directions.  Despite all those training miles, not many of them had been as into the high-teen or 20-range as I would have liked.  I was still having a few issues with the ankle I’d sprained falling down a mountain earlier in the summer.  Anxiety regarding my dissertation and graduation timeline would drift into my mind.  And a former running partner isn’t around any more so I was making sarcastic nervous comments to myself with no one to laugh along (an important activity when doing something as ridiculous as running a marathon).

The only thought not on the table was quitting.  Rain or shine, and the race involved both, I was earning that freaking medal today.

Once the race began the plan was simple: follow the lizard.  Red Lizard Running Club has members who pace for the Portland Marathon.  That means they have someone who will be keeping a consistent pace to achieve their assigned time.  And that as long as you keep up, you are guaranteed to meet your goal.  As long as I did not lose that lizard, I would meet my goal.

So I set up a very long podcast playlist and kept my eyes on Lizzy:

I had never tried creating a podcast playlist before Sunday morning, but was so happy I did.  I didn’t have to pull out my phone or make any decisions for a few hours.  And podcasts were great for keeping me on a steady pace and mentally engaged with the stories coming through the earbuds.  The plan got me out of downtown, through some industrial buildings, up the hill / mountain to St. Johns Bridge, and into Northeast Portland where Beth, a Diet Coke, and pretzels would be waiting at Mile 14.

Okay, I need to be honest for a second.  From my comfy seat on Thursday afternoon typing this I can say how Beth was the most important part of that equation.  But with the rain coming down and miles packing on, it could have been a scarecrow holding that Diet Coke and I would have loved it just as much.  Sorry Beth.  Please come again next year.

Due to some of the drama, this year’s race course was a giant out and back rather than the large loop it used to be.  So the hope in every hill we climbed was the joy of eventually going back down it.  Tragically (at 18 miles lots of things are tragic), bridges have uphills on both sides. 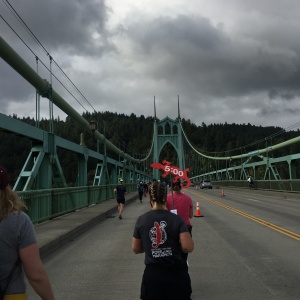 This was the point where I drifted the farthest from my lizard.  The bridge felt endless and it was so tempting to walk.  My legs were still willing even though my heart was not, so up and up we went.  Thank you legs for moving without me.  Otherwise we might still be up on that bridge.

Back down the largest hill of the course meant back into the industrial section of the course.  Stepping through this portion of Portland, I regretted that runners who had travelled to our city for the marathon were not seeing waterfront, Mt. Tabor, Forest Park, Springwater Trail, or the other pieces of this city that I loved to wander.  Instead we were in portions more likely to have an oil slick than a chalk drawing by a child.  We were out of the way of the city, but also out of the glory of the city.

At Mile 22 I was blessed to have another friend waiting, along with her adorable daughters.  Ashlee jogged alongside me with a bright smile, perfectly timed pretzels, and words of encouragement I desperately needed to hear.  Her reminder that I was love no matter my time (and that my time so far was kicking ass) was exactly the words I needed for those final four miles.

With four miles to go and some swelling confidence about beating my finishing goal, it was time to switch over to some loud music and run as fast as my legs would let me.  Now I want to admit that those around me might not have noticed a single bit of change in my speed.  But inside my head I was like Tom Cruise, dodging explosions and pumping my arms to save some random damsel in distress.  Kesha, P!nk, Hamilton, Rachel Platten, Meghan Trainor, Sia, and Florence + The Machine pumped into my ears with powerful lyrics and beats that kept me with one foot in front of the other back into the city and toward the finish line.

My pace dropped a few times between songs, as the need to walk and breathe took over for a minute or two, but once I saw that lizard creeping up behind me, it was time to move again.

Blue banners lined the end of the course with finished runners and spectators lining the sidewalks beyond them.  I scanned the crowd, not expecting to find folks I knew, and was so grateful and relieved when I spotted Coralie along the side with sons Eli and Isaac in tow.  The logical part of my brain knew she would be there to give me a ride home, but logic is obviously not a big part of 26.2 miles so there was a smile and a tear as I turned the final corner toward that longed-for finish line. 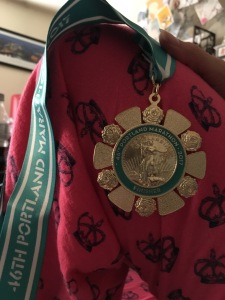 I never know exactly how a marathon is going to go.  How it will feel, what I will learn, when will I finish.  Two words summarize this particular adventure: amazed and grateful.

Now that my legs are mostly recovered, the question is the one said so often on my current Netflix binge The West Wing: What’s next?

The Art of Blogging

The Philosophy of Steven Colborne